UTAH COUNTY, Utah, Sept. 22, 2021 (Gephardt Daily) — A deputy with the Utah County Sheriff’s Office was expecting a calm, quiet food break, when he suddenly found himself in an explosion of shells.

“On 9/9/21 an unnamed Utah County Sheriff’s Office Deputy went to the Code-7 Cafe for breakfast,” says a statement released with a video (above) on Tuesday.

“His ‘Daley’ routine when working includes heating up a hard boiled egg for 20 seconds in the microwave. Never has he had a problem with that — until this day!”

Yeah, we are also guessing the “unnamed” officer may just be named Daley.

“Other than being stunned, he was not injured!,” the UCSO statement says. “But it was quite the eggsplosion!” 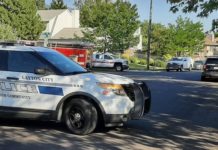