UTAH COUNTY, Oct. 18, 2019 (Gephardt Daily) — The Utah County Sheriff’s office is used to busy nights, but two calls and subsequent jail bookings this week could have been avoided if the subjects hadn’t been intoxicated and in the mountains, a sheriff’s statement says.

“Two Utah County men, one in Diamond Fork and the other near Elberta, found out that alcohol and rocks are a bad combination,” a statement from Utah County Sheriff’s Office says. “This problem was compounded because drugs were included in the mix.”

At about 7:45 p.m. Tuesday, deputies with the Utah County Sheriff’s Office and Spanish Fork Ambulance were dispatched to a report of a 26-year-old man at the Fifth Water Hot Pots in the Diamond Fork area of Spanish Fork Canyon.

Deputies found the man, later identified as Jared Thomas Christensen, “who was intoxicated, was causing a disturbance, and who had fallen multiple times and sustained significant injuries from those falls.

“There was concern that the man would be unable to walk the two miles from the hot pots to the trailhead parking lot so Search and Rescue was called to assist with a carry out.”

Spanish Fork Ambulance crew members met Christensen halfway up the trail after bystanders assisted him down the trail, the statement said.

Christensen, from Spanish Fork, sustained significant lacerations above his left eye and to his nose.

“Because he was so intoxicated, he was unable to walk down the trail by himself so ambulance crew members helped him walk the rest of the way down,” the UCSO statement says.

“Christensen was taken by ambulance to Utah Valley Hospital in Provo. Deputies found that Christensen had also ingested medication in quantities larger than prescribed.  Christensen will be charged with disorderly conduct and public intoxication.”

Later that same night, at about 10:20 p.m., deputies responded to a report of a rollover crash on Dividend Road between Elberta and Eureka in the far southwest part of Utah County.

“Derek James McCoy, 32, from Lehi, was driving along Dividend Road when he lost control of the Jeep Cherokee he was driving and it rolled,” the UCSO statement says. “He sustained minor injuries, but he had consumed alcohol and was arrested for DUI.

“McCoy was found to have three prior convictions for DUI in Utah, two of which were within the last 10 years. Those last two DUI convictions make this DUI arrest a third-degree felony.”

McCoy refused to submit to tests, so deputies obtained a warrant for blood and urine, the statement says.

“He was also found to have recently used marijuana. McCoy was booked into jail on charges of DUI and driving while having an alcohol restriction. This last charge is in place from a previous DUI conviction and restricts a person from driving a vehicle with any amount of alcohol in their body at all.” 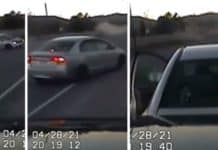