The contract extension was announced Friday in joint statement released U athletic director Dr. Chris Hill and by Whittingham.

The contract will pay Whittingham $3.3 million a year.

“We are excited about the contract extension for coach Whittingham and look forward to continued success in the Pac-12 Conference under his leadership,” said Hill.

“I am grateful for the support and commitment shown by Chris Hill and President Pershing with this contract extension,” said Whittingham, who has a 95-46 record since becoming the Utes’ head coach.

“It gives further stability to our football program and what we are trying to accomplish,” he said. “We are excited about the future here at Utah and the recruiting class we will sign next Wednesday.”

Whittingham is the only person who was involved in all of Utah’s 9 consecutive bowl wins from 1999-2009, which tied the second longest bowl win streak in NCAA history. He was the head coach for six of those wins and the defensive coordinator for the first three.

He came to Utah in 1994 as the defensive line coach and was promoted to defensive coordinator the next year. On Dec. 8, 2004, Whittingham was named the school’s 20th head coach. His first victory came three weeks later when he co-coached, with Urban Meyer, the 2005 Fiesta Bowl win over Pittsburgh. His first regular-season victory was against Arizona in the 2005 season opener.

In 2008, Whittingham engineered the best season in Utah football history when the Utes finished 13-0 and routed Alabama ─ a team that had spent five weeks at No. 1 ─ in the Sugar Bowl. Utah finished the season with a No. 2 AP ranking and Whittingham was recognized as the National Coach of the Year by the American Football Coaches Association (AFCA) and the Paul “Bear” Bryant Awards committee.

The country’s only undefeated FBS team in 2008, Utah beat four top 25 teams ─ two that finished in the top 10. In addition to his national awards, Whittingham was named the Mountain West Conference Coach of the Year.

Last season, while leading Utah to its best overall (9-4) and conference (5-4) record since joining the Pac-12 in 2011, Whittingham was named to the watch list for the 2014 Dodd Trophy and was a semifinalist for the Maxwell Football Club Collegiate Coach of the Year Award.

Whittingham began his coaching career in 1985-’86 as a graduate assistant at his alma mater, Brigham Young University. He spent one season as the defensive coordinator at the College of Eastern Utah in 1987, before a six-year stint at Idaho State (1988-’93).

A linebacker for Brigham Young from 1978-’81, Whittingham earned first-team all-WAC and WAC Defensive Player of the Year honors in 1981. He played in the first four Holiday Bowls and was named Defensive MVP of the 1981 game.

In 2008, he was inducted into the Holiday Bowl Hall of Fame. After his senior season, Whittingham played in the Hula and Japan Bowls. He played professionally with the Denver Broncos (1982 training camp) and the U.S. Football League’s (USFL) Denver Gold (1983) and New Orleans Breakers (1984). He played on the Los Angeles Rams’ replacement squad in 1987.

Whittingham graduated from BYU in 1984 and added a master’s degree from the school in 1987. 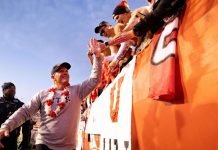 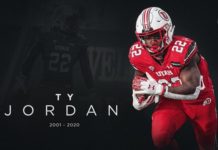