Olmstead went under water Tuesday afternoon while conducting a surface swim and did not resurface, the statement said. A search began immediately; Olmstead was recovered Wednesday morning. He was pronounced dead by Fort Campbell emergency medical services then transported to Blanchfield Army Community Hospital.

Olmstead is survived by his wife and two children.

“Our thoughts and prayers are with Lincoln’s family, especially his wife and children, friends, and teammates,” said Maj. Gen. Michael Turley, adjutant general, Utah National Guard. “While training accidents like this are rare, it is a reminder of the enormous sacrifices made by our service members and their families every day.”

“This is an absolute tragedy, especially when we lose someone as capable and promising as Lincoln,” said Col. Paul Peters, commander, 19th SFG (A). “Sometimes we expect this sort of thing in combat, but not during training, which makes this difficult for the unit and especially the family. Our thoughts and prayers are with the family and everyone affected. We are committed to ensuring the family is supported over the coming days, weeks and months.” 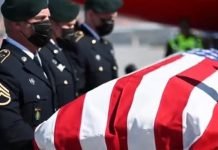