The store clerk moved out of the man’s way and he left the store. The man and woman were seen getting into a dark-colored SUV hatchback driven by a third unidentified person.

The woman is described as Caucasian or Hispanic, between 18 and 25 years old. She has dark brown hair and it appears she has a tattoo on her chest. She was wearing a black sweatshirt with white strips down the sleeves, maroon leggings and white sneakers.

The man was described as Caucasian or Hispanic between 20 and 30 years old and had a short mustache. He was seen wearing black and gray hoodie, a baseball cap, blue jeans rolled up at the ankle, and black and white sneakers.

The West Bountiful Police Department is asking for the public’s assistance with the identification of the pair. Anyone who has information on the incident or who recognizes the suspect is asked to call 801-292-4487 during business hours or dispatch on 801-298-6000, which is open 24/7. 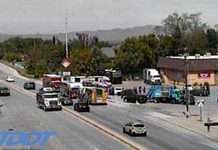