WEST JORDAN, Utah, April 27, 2022 (Gephardt Daily) — West Jordan police have released the name of the 13-year-old bicyclist who was struck and killed Tuesday by a hit-and-run driver in West Jordan.

The victim was Eli Mitchell of West Jordan, a student at West Jordan Middle School.

West Jordan police say the teen was riding his bicycle at about 6 p.m. in a crosswalk on 1510 W. 9000 South when he was hit by a light-colored Chevrolet pickup.

The WJPD took the suspect into custody overnight, and identified him this morning as Mason Andrews Ohms, 50, from Saratoga Springs.

Ohms faces initial charges of automobile homicide and failure to remain at the scene of an accident involving death, both third-degree felonies.

Witnesses and responding officers performed CPR on the boy before he was transported to Intermountain Medical Center, where he was pronounced dead, West Jordan police confirmed. Ohms’ probable cause statement indicates the boy was wearing a helmet, but suffered significant head trauma and broken bones.

“We know Mr. Ohms arrest will not bring back this lost child to his grieving family; however, we hope it allows them to have some closure.”

Ohms’ probable cause statement revealed that witnesses at the scene provided recordings that gave police his license plate number. The statement also says the boy’s bicycle became stuck under Ohms’ truck, and Ohms fled the scene, but stopped at a parking lot, where the “driver got out of the vehicle and removed the bicycle from underneath his truck and then got back into the vehicle and continued to flee the scene.”

“We want to thank all of the witnesses in this case as our officers have located the suspect and arrested him,” police tweeted.

Ohms owns a 2007 silver Chevrolet Silverado with the plate that matches the suspect vehicle, and his clothing matched that on the recording from the scene.

When confronted outside his residence and told it was about a hit and run, “Mason spontaneously stated, I felt a bump and did not know what it was.
Detectives reminded Mason of his rights at this time, and did not ask Mason any questions.”

An officer who transported Ohms to the police station “said he could smell the distinct and overwhelming odor of an alcoholic beverage coming from Mason’s mouth, while he was sitting in the vehicle next to Mason. Detective S. Hutchings said Mason was not speaking, but the odor of an alcoholic beverage was so strong on his breath, Detective S. Hutchings could smell it as Mason was breathing, with his mouth open.”

Ohms was booked into the Salt Lake County jail system, where he is being held without bail. 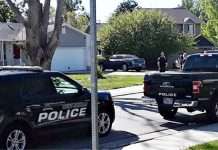