Sept. 23 (UPI) — British Prime Minister Boris Johnson had stern words for the world’s leaders Wednesday during his speech before the U.N. General Assembly, urging them to take more action on climate change because the earth “is not some indestructible toy.”

He was among several leaders who spoke during the second day of the General Debate of the assembly, which included Venezuelan President Nicolas Maduro and Ukrainian President Volodymyr Zelensky.

Johnson said the upcoming 2021 U.N. Climate Change Conference — COP26 — in Scotland must serve as a turning point on the environment.

“It’s time for humanity to grow up. It is time for us to listen to the warnings of the scientists,” he said. “And look at COVID, if you want an example of gloomy scientists being proved right — and to understand who we are and what we are doing.

“The world — this precious, blue sphere with its eggshell crust and wisp of an atmosphere — is not some indestructible toy, some bouncy plastic romper room against which we can hurl ourselves to our heart’s content.”

Maduro, who is not officially recognized as Venezuela’s president by the United States and many Western allies, demanded an end to all sanctions against the country, descriging them as “systematic, cruel and criminal.”

Maduro did not deliver his address in person, instead, he, like many others at the General Assembly, opted for a prerecorded address. Maduro also faces drug trafficking charges in the United States.

He also called for the “building of a new world” free of hegemony and instead based on principles of multilateralism and international law.

Kenyan President Uhuru Kenyatta pointed out an “asymmetry” in vaccine supply, stating it “reflects a multilateral system that is in urgent need of repair.”

“To rebuild successfully requires a worldwide response in confidence and investment to enable production and consumption to bounce back to pre-pandemic levels,” he said. “The surest way to building that confidence is by making vaccines available to the world in an equitable and accessible manner.”

“What really motivates us are the strong desire for peace, cooperation and development among the people around the globe, and the deep perception of nations on the importance of international solidarity and multilateralism,” he said.

In his remarks on Tuesday, Biden called for greater unity worldwide to end the coronavirus pandemic, said there is great urgency in fighting climate change and said the United States does not seek a “new Cold War.”

“The United States is ready to work with any nation that steps up and pursues peaceful resolutions to shared challenges even if we have intense disagreements in other areas,” he said.

Wednesday morning, Biden participated in a COVID-19 virtual summit, where he announced the United States is doubling its purchase of Pfizer’s vaccine to 1 billion to share with other countries, particularly poorer nations.

Biden has said he would like to see 70% of the global population vaccinated by next year. 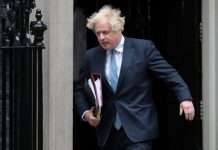