The temblor struck at 7:09 a.m., shaking homes, rattling nerves, and could be felt as far north as Evanston, Wyoming.

According to the U.S. Geological Survey the epicenter of the quake was about 10.1 km from the surface.

There are reports of minor to moderate damage, including 9 buildings in Magna.

A growing number of homeowners are also reporting damage.

An abandoned building in downtown Salt Lake City where bricks fell on a stretch of sidewalks near 500 W. 400 South, although there are no reports of injuries.

Salt Lake International has closed to air traffic while safety inspectors look for damage. A number of water lines have broken leading into the terminals and the road leading into the airport has also been closed.

Hazmat teams have also been dispatched to Kennecott, where there is concern that two storage tanks containing thousands of gallons of hazardous chemicals appear to be leaking.

The LDS Salt Lake Temple was also damaged, including the famed statue of the Angel Moroni, part of which plummeted to the roof below.

Electrical outages are also reported throughout the valley with nearly 72,000 homes losing power since the initial quake. 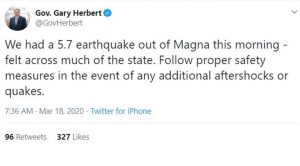