Sept. 13 (UPI) — The husband of a missing Connecticut woman pleaded not guilty Thursday to a new charge related to the disappearance of his estranged wife.

Fotis Dulos appeared in court in Stamford where he pleaded not guilty to his second count of tampering with evidence.

His wife, Jennifer Dulos, went missing May 24 after dropping her children off at school. Her disappearance came amid divorce and custody proceedings with Fotis Dulos.

Fotis Dulos and his girlfriend, Michelle Troconis, previously pleaded not guilty to charges of hindering prosecution and obstruction of justice in the disappearance of his wife. The original charges were based on surveillance videos appearing to show him making multiple stops on a 4-mile stretch of road as he tossed out garbage bags that were later found to contain Jennifer Dulos’ blood.

Also Thursday, a judge issued a gag order in the case against Fotis Dulos. Judge John F. Blawie said media coverage of the case has led to the reporting of “theories masquerading as facts, and stories based upon unauthorized leaks of partial information, some apparently from law enforcement sources.” 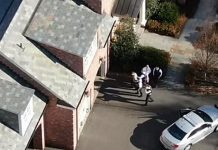