Nov. 24 (UPI) — A federal judge has awarded a Washington Post correspondent and his family $180 million in damages in a lawsuit against Iran after he was held captive on spy charges in the country for 544 days and tortured.

U.S. District Judge Richard Leon entered the judgment Friday against Iran for assault, battery, false imprisonment of Washington Post journalist Jason Rezaian and emotional distress to him and his family.

“During the almost year-and-a-half long detention, Jason was physically and psychologically abused,” Leon wrote the memorandum opinion. “He was deprived of sleep. He was denied medical care. He was interrogated, threatened with execution, and charged with espionage.”

Rezaian was released in early 2016, along with three other U.S. prisoners, in a prisoner swap between the United States and Iran where the United States granted clemency to several Iranians convicted of sanction violations and agreed to pay Iran approximately $1.7 billion.

He had been detained since July 2014 after working for the Post for two years as a dual U.S. and Iranian citizen, along with three other journalists, with his wife Salehi, who worked as a correspondent for a United Arab Emirates-based newspaper, being among them.

Rezaian’s wife was freed in October 2014 after the two others journalists were freed earlier that year.

The Rezaian family sued Iran under the Foreign Sovereign Immunities Act, alleging “his detention amounted to hostage taking and torture,” and Iran did not appear to defend its conduct, the court filing shows. 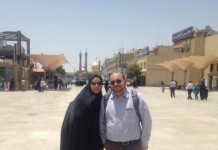