Dec. 11 (UPI) — Two journalists from the Philippines and Russia received their Nobel Peace Prizes on Friday in a ceremony in Oslo, Norway.

Filipina Maria Ressa and Russian Dmitry Muratov accepted the prestigious award for their work in countries where the press often comes under attack from hostile, authoritarian governments.

Ressa received special permission from the Philippine court of appeals to travel after they deemed she wasn’t a flight risk, The Guardian reported. Ressa, who is the co-founder and CEO of news website Rappler, faces criminal charges that could lead to 100 years in prison in her home country.

She has been a vocal critic of Philippine President Rodrigo Duterte, whose deadly war on drugs has been the focus of several investigative articles in Rappler.

In her speech, Ressa drew a connection between herself and Muratov, to Carl von Ossietzky, the last working journalist to receive the Nobel Peace Prize. He was held in a concentration camp by Nazi Germany.

“By giving this to journalists today, the Nobel committee is signaling a similar historical moment, another existential point for democracy,” she said.

Ressa took issue with the role of social media in spreading misinformation.

Muratov, editor in chief of Russian newspaper Novaya Gazeta, called for an end to violence and “militaristic rhetoric” in state-run Russian media.

“The powerful actively promote the idea of war. Aggressive marketing of war affects people and they start thinking that war is acceptable,” he said, according to The New York Times.

The Norwegian Nobel Committee announced Ressa and Muratov as co-winners of the Nobel Peace Prize in October. 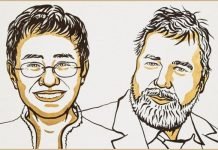 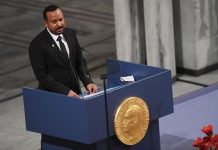