March 6 (UPI) — The National Transportation Safety Board said the pilots of United Airlines Flight 328 increased the throttle to negotiate expected turbulence before it experienced engine failure and had to make an emergency landing last month.

The preliminary report, released Friday, also found that a fan blade on the failed engine had “multiple fatigue fracture origins” and that it was last inspected in 2016. With just shy of 3,000 cycles in which the Pratt & Whitney 4000 series engine is turned on and off, the fan blade was less than halfway to the point at which it needed another inspection, which comes after 6,500 cycles.

The Boeing 777-200 jet with 241 people on board landed safely with no injuries Feb. 20 at Denver International Airport after engine failure caused debris to fall in nearby Broomfield. The plane was about 20 minutes into its flight to Honolulu.

The NTSB update didn’t include an analysis of the flight nor provide information on a possible cause of the engine failure.

The report said after the engine failure, pilots declined to dump fuel to prevent a larger fire during landing.

“They elected not to dump fuel for safety and time reasons and determined that the magnitude of the overweight landing was not significant enough to outweigh other considerations,” the report said.

Last month, the NTSB in an update said the aircraft body also suffered some minor damage, he said, including at the location where the wing joins the plane, as well as some nicks and dings, but there was no structural damage.

The incident has resulted in the grounding of dozens of Boeing 777 planes with the Pratt and Whitney 4000-112 series engine.

Boeing said it recommends suspending operations of all such planes and Japan’s aviation regulatory instructed the airplanes to be removed from schedules as a Japan Airlines flight from Naha to Tokyo powered by the same engine in December had to return to the airport due to an issue with one of its engines.

United Airlines removed all Boeing 777 aircraft from service the day after the crash. 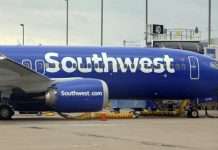