April 20 (UPI) — When Hurricane Michael hit the Florida panhandle last fall, it was a Category 5 storm — the first to hit the United States in a quarter-century and just one of four ever to make landfall at that strength, meteorologists said Friday.

Michael was classified as a Category 4 storm when it arrived on Oct. 10, but the National Hurricane Center revised the storm to Category 5 strength in a new analysis Friday.

The 86-page study said the hurricane’s maximum sustained winds at landfall were 160 mph — above the 157 mph threshold for Category 5 storms on the Saffir-Simpson Hurricane Wind Scale. Category 5 is the strongest rating for a hurricane.

Michael was responsible for an estimated $25 billion in damages.

The report said Michael produced estimated storm surges of up to 14 feet above ground level in Florida’s Bay and Gulf Counties, with the highest recorded at Mexico Beach. It also caused heavy rains in portions of western Cuba and produced 16 tornadoes in Florida, Georgia, South Carolina and North Carolina. Officials said Michael was directly responsible for 16 deaths in the United States. 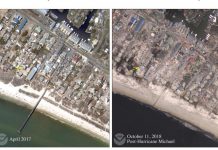 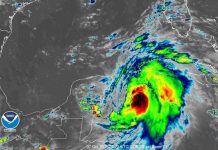 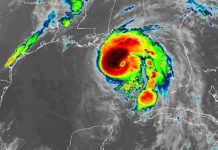 Hurricane Michael is a Category 4 storm