March 23 (UPI) — The Senate swore in new leadership for Congressional law enforcement on Monday following a shakeup in the wake of the Jan. 6 riot at the Capitol.

“I’m so proud that leadership team I announced for Senate sergeant-at-arms is officially assuming their roles today,” Senate Democratic leader Chuck Schumer wrote on Twitter. “This is the first time in history that the leadership team will be comprised entirely of women.”

Gibson, who served 33 years in the military and held the role of deputy director of national intelligence, told The New York Times that “gender is perhaps not really relevant.”

“People have been selected for their qualifications and their competence,” she said.

Gibson will replace Michael Stenger who resigned along with former House Sergeant-at-Arms Paul Irving after supporters of former President Donald Trump made their way into the Capitol building as Congress worked to certify the results of the 2020 presidential election.

Following the riot, Gibson worked with retired Army Lt. Gen. Russel Honore on a task force to determine how Capitol security could have more effectively responded to the riot.

Standing at the Capitol on Monday, Gibson said she was “aghast” watching the insurrection unfold.

“I thought, ‘I am witnessing the kind of activities that I have seen happen in nations I deployed to.’ I never expected to see that in the United States. It was shocking,” she said.

Gibson also addressed plans to remove fences that were erected around the Capitol and National Guard troops who were stationed in the area following the riot to allow more public access to the landmark.

“Already, the U.S. Capitol Police is beginning to make some of those trade-offs with parts of the fence coming down,” she said. “Any legislative body, more so than some elements in the executive branch, needs to balance that kind of public access with security.” 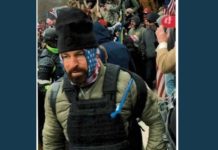