Sept. 23 (UPI) — Actor and screenwriter Justin Theroux says his breakup with his wife, actress Jennifer Aniston, “was as painless as it could be.”

“The good news is that was probably the most — I’m choosing my words really carefully — it was kind of the most gentle separation, in that there was no animosity,” Theroux told The New York Times in an interview published Saturday.

The couple had been together for seven years — and married for two — when they announced in February that they had split up, People magazine noted.

“It was heartbreaking, only in the sense that the friendship would not be the same, as far as just the day to day,” Theroux said. “But the friendship is shifting and changing, you know, so that part is something that we’re both very proud of.”

Best known for his performance in the HBO drama The Leftovers, Theroux will soon be heard voicing one of the titular dogs in a new version of the animated movie Lady and the Tramp, opposite Tessa Thompson.

Netflix recently acquired and plans to release Aniston’s film Dumplin’, which features original music by Dolly Parton. Aniston famously starred on the sitcom Friends from 1994 to 2004. 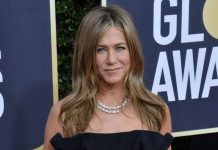