May 26 (UPI) — Virgin Orbit said it terminated the launch of a demonstration rocket Monday afternoon shortly after its release from the wing of a 747 jet over the Pacific Ocean.

The rocket, called LauncherOne, was to ignite its engines in mid-air for the first time as the company develops a new method to send satellites into orbit.

The jet released the rocket just after 3:50 p.m., but the company announced the mission was terminated shortly afterward, without immediate explanation.

Later in the afternoon, Virgin Orbit tweeted, “Launcher One maintained stability after release, and we ignited our first state engine, NewtonThree. An anomaly then occurred in first stage flight.

“We’ll learn more as our engineers analyze the mountain of data we collected today.”

The crew on the plane was safe and returned home, according to the company.

Virgin Orbit, privately owned by Richard Branson’s Virgin Group, intends to use the rocket to launch commercial or government satellites. Launching from a jet means the company can launch from any approved airport, not just from rocket launch pads.

Once in space, the rocket was supposed to release a small satellite that would transmit data to the ground and then leave, according to Virgin Orbit.

Being able to launch rockets from airports means the company can “repopulate a satellite constellation very quickly, placing them into orbit at exactly the right time and place because we can take off from so many locations,” said Stephen Eisele, Virgin Orbit’s vice president of business development.

“We can even help the government replace satellites quickly if they are knocked out by a bad actor,” Eisele said.

Virgin Orbit is trying to develop a system of under-wing rockets intended to be cheaper and more flexible than its most similar competitor. That is Northrop Grumman’s under-wing system called Pegasus, which first launched in 1990.

Recent Pegasus missions have carried price tags of more than $40 million per launch, while Virgin Orbit looking at a price at $10 million to $12 million per mission.

Virgin Orbit has worked on developing the LauncherOne system for five years, with hundreds of test-firings of its NewtonThree engines and two dozen test flights of the jet, called Cosmic Girl.

The rocket is designed to carry relatively small payloads, a little over 650 pounds, into space. By comparison, a SpaceX Falcon 9 rocket can carry over 50,000 pounds into space. 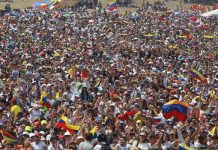 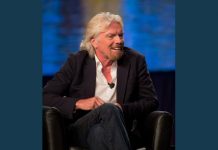 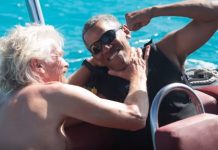 Barack Obama learns how to kitesurf with Richard Branson during vacation