Feb. 5 (UPI) — President Donald Trump and first lady Melania Trump invited more than a dozen Americans — including members of law enforcement, children and symbols of criminal justice reform — to the State of the Union address, the White House revealed Monday.

The president is set to give his annual speech before both chambers of Congress at 9 p.m. EST on Tuesday. He and House Speaker Nancy Pelosi delayed the event due to the 35-day government shutdown.

Among the guests invited by the Trumps are:

The family of Gerald David and Sharon David, who were killed in their Nevada home in January. President Trump cited their deaths as a reason for stronger border security; an undocumented El Salvadoran man has been charged with murder. The Davids’ daughter Debra, granddaughter Heather and great-granddaughter Madison will be at the State of the Union.

Matthew Charles, who served 23 years in prison for selling crack cocaine. He was the first prisoner released under Trump’s prison reform legislation, the First Step Act.

Alice Johnson, who is also a symbol of Trump’s criminal justice reform efforts. The president granted her clemency in June after 22 years in prison for a non-violent drug offense.

Grace Eline, who, at the age of 9, was diagnosed with a form of brain tumor called germinoma. Instead of asking for gifts for her birthdays, she has asked for charity donations.

Ashley Evans, who is nearing the one-year, one-month anniversary of becoming sober after years of opioid and substance abuse.

Another member of law enforcement, Timothy Matson was a member of the Pittsburgh Police Department SWAT team that responded to the mass shooting at the Tree of Life Synagogue that left 11 people dead.

A survivor of that shooting, Judah Samet. He also survived the Holocaust before immigrating to Israel and serving as a paratrooper in the military there. He later immigrated to the United States in the 1960s.

Roy James, the plant manager of a lumber facility that the White House said was saved by the 2017 tax reform legislation.

Tom Wibberley, whose son, Navy Seaman Craig Wibberley, died in an attack on the USS Cole in 2000. 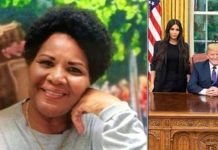