Jan. 31 (UPI) — An Amtrak train carrying Republican members of Congress to a retreat in West Virginia on Wednesday collided with a trash truck near Charlottesville, Va. — killing the driver and injuring others.

“The president has been fully briefed on the situation in Virginia and is receiving regular updates. There is one confirmed fatality and one serious injury,” Sanders said. “Senior Administration officials are in regular contact with Amtrak and state and local authorities. Our thoughts and prayers are with everyone that has been affected by this incident.”

It’s unclear exactly how many people were hurt in the crash, or the extent of their injuries.

“An Amtrak train came into contact with a vehicle that was on the tracks at 11:20 a.m. in Crozet, Va. There are no reported injuries to passengers or crew members. Local law enforcement is investigating the incident and crews are inspecting equipment for damage. The train originated in Washington, D.C. Updates will be provided as new information becomes available.”

Sen. Jeff Flake, R-Ariz., told CNN one of the drivers had died. The office of Rep. Roger Marshall, R-Kan., said the lawmaker and physician was among those treating injured passengers.

Reps. Don Bacon, R-Neb., and Bradley Byrne, R-Ala., tweeted from the train they were fine.

“The train carrying GOP members to our retreat had a collision, but Rebecca and I are both okay,” Byrne wrote.

Rep. Greg Walden, R-Ore., posted a photo of the wreckage.

“We’re fine, but our train hit a garbage truck,” he tweeted. “Members with medical training are assisting the drivers of the truck.”

The cause of the crash was not immediately known.

Congress is out of session for the rest of the week. 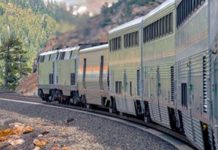