Jan. 6 (UPI) — President Joe Biden criticized former President Donald Trump on Thursday during an address to commemorate the anniversary of the Jan. 6 attack on the U.S. Capitol a year ago.

Biden gave his remarks at the National Statuary Hall at the Capitol, the building that was overrun by extremist Trump supporters in an effort to disrupt the Electoral College vote confirming Biden’s victory in the 2020 presidential election.

In his speech, Biden denounced Trump for sowing a “web of lies” about voter fraud and a “stolen” election and undermined democracy in the United States because he couldn’t come to terms with the fact that he’d lost.

“I will stand in the breach. I will defend this nation, and I will allow no one to place a dagger at the throat of democracy,” Biden said.

The remarks were Biden’s harshest yet about Trump, who was the first president in almost 30 years to fail to win a second term — and the only president to be impeached by the House twice, the second for inciting the Capitol attack. On both occasions, Trump was acquitted by the Republican-controlled Senate.

In his forceful rebuke, the president accused his predecessor of valuing profit and personal gain over the rule of law and the will of the people.

Biden also noted that Trump did literally nothing to intervene for hours while a radicalized mob loyal to his presidency broke into the Capitol and looked to harm members of Congress.

“[Trump] has done so because he values power over principle,” Biden added. “Because his bruised ego matters more to him than democracy or the Constitution. He can’t accept that he lost, even though that’s what 93 United States senators, his own attorney general, his own vice president, governors and state officials in every battleground state have all said. He lost.”

The president also had words for the rioters who ransacked the Capitol, saying they were not “patriots” and were not trying to save democracy.

“You can’t love your country only when you win,” he said. “You can’t obey the law only when it’s convenient. You can’t be patriotic when you embrace and enable lies. Those who stormed this Capitol, those in instigated and incited it and those who called on them to do so, held a dagger at the throat of America.”

Biden again called for support of potentially landmark voting right legislation that’s been passed by the House, and criticized several GOP-led states for bowing to Trump in passing stricter voting laws since the 2020 election.

The president was emphatic against the notion that the United States is a country that accepts “political violence as a norm.”

“And so at this moment we must decide what kind of nation we are going to be,” he said. “Are we going to be a nation where we allow partisan election officials to overturn the legally expressed will of the people

“Are we going to be a nation that lives not by the light of the truth but in the shadow of lies? We cannot allow ourselves to be that kind of nation. The way forward is to recognize the truth and to live by it.” 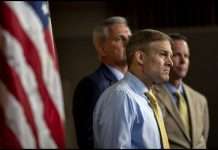 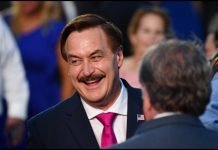 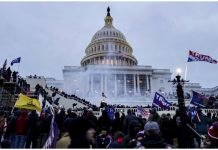