DENVER, Colorado, Oct. 10, 2020 (Gephardt Daily) — Police in Denver say one man is dead and another in custody after a shooting near the site of two rival downtown protests Saturday afternoon.

According to Denver Police Division Chief Joe Montoya the alleged shooter is a private security guard.

Ch9News reported the Pinkerton guard had been hired by the Denver TV station to protect their field crews during the Saturday demonstrations.

Witnesses told police the guard opened fire when a single demonstrator believed to be with right-wing group “Patriot Rally” sprayed him with a can of mace.

According to the Denver Post, the right-wing protesters — led by John Tiegen, an El Paso County (Colorado) resident — came together in the park’s amphitheater to chant patriotic songs and display banners earlier in the afternoon.

The left-wing counter demonstrators “held up flags and signs railing against Nazis and white supremacists as they gathered in the middle of the park, several hundred feet from the barricaded-off amphitheater,” the Denver Post reported.

The shooting was captured on surveillance cameras in the area, and police investigators are reviewing the footage.

Neither the victim’s or the Pinkerton guard’s name have been released.

Denver Police Division Chief Joe Montoya made a public statement after the incident and the video of his press conference, which police posted on Twitter, can be viewed below. 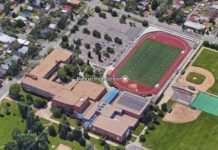