TOOLE, Utah, Oct. 24, 2020 (Gephardt Daily) — The Tooele City Police Department is asking for the public’s help in identifying two people shown in surveillance photos with a 14-year-old girl who has been missing since Tuesday afternoon.

Mia Richards, who is believed to have run away from home, is without her prescribed medications, police said in a Facebook post.

Police have since received surveillance photos that were taken at a Maverik in Tooele City on Tuesday.

“The photos show the missing female with an adult male and a female wearing a white shirt,” Tooele PD said in a Facebook post Saturday. “All three individuals left the Maverik in a 2006-2010 dark color Ford Expedition. The Expedition has damage to the passenger side running board and is missing paint on the rear driver’s side door.”

Anyone who recognizes the people in the photos, or who knows who owns the Expedition, is urged to call police dispatch at 435-882-5600 (Option1) and reference case #11623. 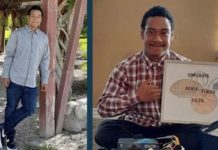