WHITE RIVER NATIONAL FOREST, Colo., July 11, 2016 (Gephardt Daily) — A moose and an SUV were both able to leave the scene under their own power after a dramatic collision in White River National Forest, in Colorado.

The moose was limping, but rangers followed the tracks for some distance without finding the animal, so say it survived in the short term.

The shooter of a viral YouTube video hopes the moose survived long term despite being knocked off of its feet and into the air.

Kayla Whitehead posted the video on YouTube on July 5. It may be disturbing to some, so view it at your own digression. Rangers said they hoped to use the video — which can be seen by clicking the player above — to teach visitors to be more careful and aware of their surroundings when passing through an area known for wildlife.

Whitehead also posted the explanation, below:

“On our way to go backpacking in Eagles Nest Wilderness, CO, we pulled over to watch 2 moose running along HWY 9 as one moose took a turn for the road and the other stopped to watch. An oncoming car didn’t see what was coming. I think the guys were just from out of town and didn’t know that a bunch of cars pulled over means there’s wildlife on mountain roads. Be careful driving mountain roads — watch for wildlife! When you see a bunch of cars pulled over near ‘watch for wildlife’ signs, there’s probably an animal near the road.

“The car windshield was shattered and nearly broke through. The people in the car said they were OK. The moose left a skid mark of hair on the road and limped off slowly into the bushes. Parks and Rec said they followed the moose tracks a ways and it seemed to have walked off, so it might have made it!” 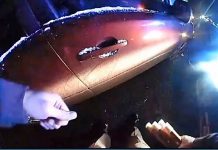 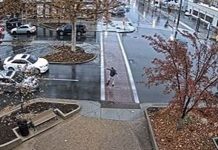