Aug. 9 (UPI) — Despite the risks associated with COVID-19, about 40% of Americans say they have returned to normal, “pre-COVID-19 life,” according to a survey Tuesday.

The survey conducted by the University of Pennsylvania’s Annenberg Public Policy Center found that 41% of respondents said they have moved back to their prepandemic routines.

The survey also showed that nearly 20% think a return to normal is still more than a year away, while 23% say they may never return to a pre-COVID-19 normal.

“After more than two years of experience with COVID-19 and its effects, the public is largely aware of the nature and risks of infection,” Annenberg Public Policy Center Director Kathleen Jamieson said in a statement.

“A consistent percentage does not believe a pre-COVID normal will ever be restored. But a growing number have returned to their pre-COVID life. One can only hope that those in each group have accurately calculated the risks and benefits that their decision entails.”

The rise in people returning to prepandemic routines might be surprising because they are aware that the virus remains dangerous.

Tuesday’s survey said that 54% of respondents said they know at least one person who’s died of COVID-19, and 31% know someone who’s experienced long COVID.

Additionally, 71% said they’re aware that long-term harmful effects like neurological problems and fatigue can result from COVID-19 infection — an increase from 64% in April.

The Annenberg Public Policy Center said the survey was conducted between July 12-18 and involved almost 1,600 U.S. adults. It has a margin of error of 3.3 points. 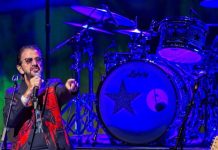