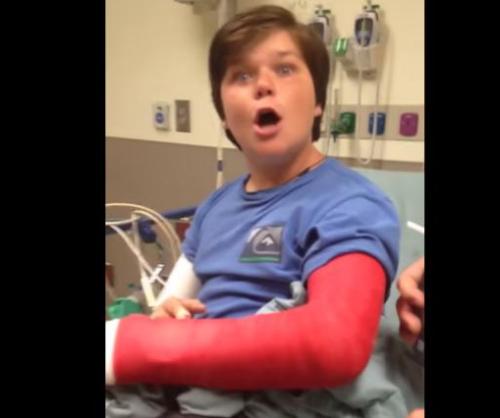 Doped-Up Boy With Broken Arm Amazed by His New Cast

ROSWELL, Ga., June 5 (UPI) — A Georgia girl shared video of her little brother waking up in a painkiller drug haze at the hospital and reacting with elated excitement to his new arm cast.

Aubree Clark of Roswell posted a YouTube video of her brother, Walker, waking up in his hospital bed and quickly switching from confusion about his location to excitement about the red cast on his arm.

“Where am I? I have a cast! Look at my cast! Whoah!” the boy says to his family.

“My cast is amazing,” he says.

At one point, a member of the boy’s family covers his arm with a blanket, leading Walker to panic.

Clark shared the video on Reddit, where she explained Walker had broken his arm when he jumped off a rope swing and landed on “solid ground.”

She said the boy was under the influence of prescription painkiller ketamine and anesthetic propofol when she recorded the video.