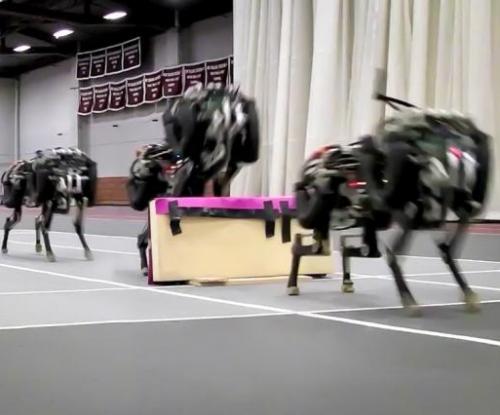 CAMBRIDGE, Mass., May 29 (UPI) — A year after showing off a robotic cheetah that can run while not tethered to a machine, researchers at the Massachusetts Institute of Technology have trained it to autonomously see and jump over hurdles while running, accomplishing a feat that many humans have trouble with.

Using reflections from a laser to “see” and a three-part algorithm to plan out its jumping path, the robot successfully cleared obstacles of varying height on a treadmill before doing it again while untethered on an indoor track.

“A running jump is a truly dynamic behavior,” said Sangbae Kim, an assistant professor of mechanical engineering at MIT, in a press release. “You have to manage balance and energy, and be able to handle impact after landing. Our robot is specifically designed for those highly dynamic behaviors.”

The MIT team will present the jumping cheetah at the DARPA Robotics Challenge in June and present a paper on the autonomous movement system that allows the robot to run and jump at the Robotics: Science and Systems conference in July.

Kim said that researchers will next work with the robot to jump hurdles on softer ground, such as a grassy field.