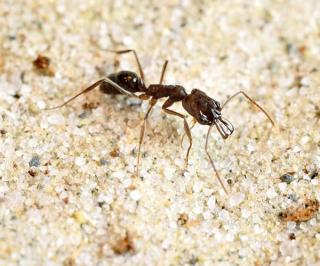 Trap-jaw Ants Use Spring-loaded Jaws to Jump From Predators

CHICAGO, May 13 (UPI) — The spring-loaded trap-jaw ants can kill or main prey in a matter of microseconds. The ants’ mandibles are the fastest moving predatory appendages on earth.

But they aren’t just for exacting violence. New research suggests the lightening-fast jaws serve as an escape tool, as well — hurling themselves out of harm’s way when a predator lurks nearby.

Researchers had previously witnessed the jaw-induced jumping maneuvers, but couldn’t say for sure whether or not it was a defensive strategy — and if so, whether it worked or not.

A new study confirms that the move can help trap-jaw ants escape perilous scenarios. Scientists learned as much by tossing trap-jaw ants into a pit populated by antlions, an ant-eating insect resembling a dragonfly. Antlions are sometimes called doodlebugs.

Not surprisingly, hurling itself violently through the air isn’t the ants’ preferred method of evasion. Simply running out the of the pit was choice numero uno. But when simpler escape routes weren’t successful, the ants fell back on jaw-loaded catapulting. They were successful 15 percent of the time.

“If an ant falls into the pit, it tries to run away, but the sand crumbles beneath its feet,” Fredrick Larabee, a biology grad student at the University of Illinois, explained in a press release. “This pulls it closer to the center of the pit where the antlion is waiting.”

“The ants were able to jump out of the pits about 15 percent of the time in their encounters with antlions,” Larabee confirmed. “But when we glued their mandibles shut before dropping them in the pits, they couldn’t jump at all. It cut their survival rate in half.”

Larabee says their research — published recently in the journal PLOS ONE — is proof that evolution can yield multipurpose tools.

“In this case, a tool that is very good for capturing fast or dangerous prey also is good for another function, which is escape.”