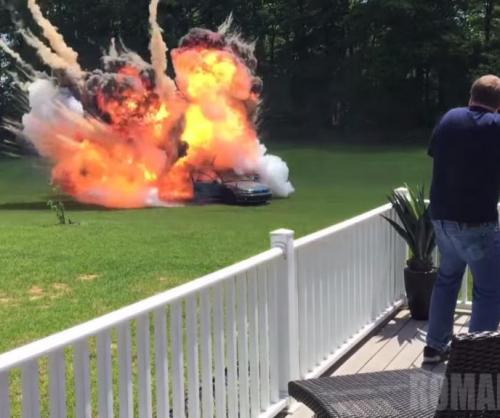 COLUMBUS, Ohio, May 19 (UPI) — An Ohio-based professional prankster got his grandmother’s goat by making it seem as if he had accidentally blown up her beloved car.

Roman Atwood’s latest YouTube prankcame at his grandmother’s expense when he called her over to his house under the guise of wanting her to give an interview for a reality show.

Atwood tells his grandmother in the video he needs to have his friends fire guns near her car as part of a stunt for the show, but he assures her the vehicle will not be harmed.

The friends shoot at the car, causing it to explode in flames.

“And I just had new tires put on it!” Atwood’s exasperated grandmother exclaims.

Atwood then reveals the truth behind the prank to his grandmother — the detonated car was a replica and her actual car was not harmed. The prankster finished the video by giving his grandma a brand new car.