Dec. 12 (UPI) — The House on Thursday passed a bill to lower prices for prescription drugs, though lawmakers don’t expect the sweeping legislation to pass the Senate.

The chamber passed the bill with a vote of 230-192 with unanimous Democratic support. Two Republicans also voted in favor — Reps. Brian Fitzpatrick of Pennsylvania and Jaime Herrera Beutler of Washington.

Republicans in the Senate have indicated the legislation won’t pass the upper chamber. Senate Republican leader Mitch McConnell described the bill as “socialist” and said he doesn’t plan to bring up legislation that splits the Republican caucus.

Even if the Senate passes the bill, the White House indicated President Donald Trump won’t sign it.

The legislation would allow Health and Human Services to negotiate for lower prices for about 250 prescription drugs covered by Medicare that don’t have competitors.

“What I hear most often is not impeachment, it’s not what’s on the front page of The Washington Post, it’s ‘What are you going to do about the cost of our prescription drugs?'” Rep. Kim Schrier, D-Wash., said. “And this bill is an answer to my constituents.” 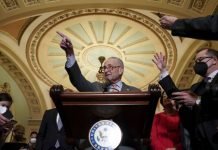