“It’s been really, really challenging in so many ways, and just having people be unwell and not feeling safe,” the 46-year-old Grammy winner told reporters in a recent Zoom interview.

“It’s been a huge social, relational, spiritual, cultural, economic, political fart storm over the last while, and, one thing, there’s so many silver linings. It almost feels sacrilegious to bring them up while we are still in the middle of this, but so many themes of expression are available.”

Before the pandemic, Morissette spent decades writing and recording records, touring to promote them and then trying to recover physically and emotionally before starting the process all over.

“What’s been great about the last few years and, specifically with us being in lockdown and at home, is I’ve been breastfeeding my son and just (been) really close to everybody,” she said.

Morissette released “Such Pretty Forks in the Road,” her first studio album in eight years, in July.

But some work obligations have been put onhold, allowing the mother of three to explore other creative paths, such as “unschooling” her two older children — ages 4 and 10 — at home.

She also signed on to play a celestial version of herself in “The Great North,” a Fox cartoon comedy set in Alaska and airing Sundays.

Morissette said she loves doing voiceover work and was eager to work on a smartly written show run by “deeply soulful, caring women.”

“I have a secret, secret obsession with animated series and shows and the kind of humor and the kind of collective experience of everyone collaborating together,” she added.

“Having just done a musical on Broadway (‘Jagged Little Pill’), I’ll never want to not collaborate again. Can I write alone? Yeah. It’s just way less fun, way less fun than doing things in a group like this.”

The creators of “The Great North” said they wrote Morissette as a character and then crossed their fingers while waiting to hear if she would play the imaginary friend of teen Judy (Jenny Slate) on the show.

Morissette appears in the sky as part of the Aurora Borealis, or northern lights.

“So, we wrote her in in the hopes that she would do it, and she did. And, so, I think, from our end, we just hoped she would be into it, and, luckily, it worked out.”

“The Alanis part, you can’t really have a backup. You can’t be, like, ‘Oh, now let’s send it to Jeremy Irons to play Alanis Morissette.’ You have to get the real deal,” co-creator Wendy Molyneux said.

Quipped Morissette: “Fiona Apple was before me. It’s OK.”

The singer learned she was wanted for the show from a trusted, mutual friend she shares with the writers.

She was immediately intrigued by the job offer, but unsure how big a role she would have.

It is nearly 26 years since Morissette released her iconic album, “Jagged Little Pill,” unleashing into the world beloved songs like “You Oughta Know,” “Hand in My Pocket,” “Ironic,” “You Learn” and “Head Over Feet.”

The recording artist admitted the quarter-century milestone seemed surreal to her.

“Time is an illusion thing. It is really up in my face,” she said. “And then the ego part, of course, is just questioning my mortality every 10 seconds.”

She thinks the songs have stood the test of the time and still reflect the beliefs she had when she was 19.

“My value system has remained pretty consistent,” she said. “So, there’s no inner conflict with the lyrics. … Mostly, I can stand by them, and it’s been a real honor to celebrate [the album] even though 2020 wound up looking completely different than what we anticipated.”

Morissette began her music career when she was 10, launching her own record company at 11 with her parents’ help when no one would sign her because she was so young.

She recalled being obsessed with the idea of writing, performing and traveling.

“The images that I had in my mind’s eye for as long as I can remember was that of traveling the world, meeting all of these people, and then I get to make joyful noise and sweat and eat my way through the whole planet. It’s really amazing,” she said.

The Broadway musical inspired by “Jagged Little Pill” has been closed for a year, along with other New York City plays and musicals, due to the coronavirus pandemic. It is up for 15 Tony Award nominations. 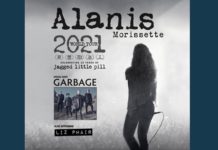 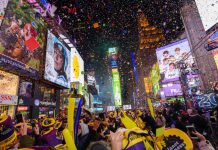 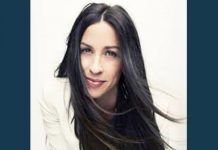