CIRCLEVILLE MOUNTAIN, Piute County, Feb. 8, 2019 (Gephardt Daily — Searchers have located the body of a man caught in an avalanche while riding his snowmobile on Thursday evening.

The name of the 41-year-old victim, whose body was found at about 11:45 a.m. Friday, has not yet been released.

According to information from the Beaver County Sheriff’s Office, three men from Washington County were snowmobiling in the bowl area of Circleville Mountain when two were caught in an avalanche.

The rider who was not trapped was able to see and dig out one of his friends, but the third man could not be located. The call for help came in at 5:09 p.m., and searchers from Piute, Beaver and Sevier counties responded to the scene.

But due to plummeting visibility and temperatures, as well as unstable snow, searchers had to leave for the night without finding the missing man.

A news release was issued at about 10 a.m. Friday, prior to the discovery of the body, by the Beaver County Sheriff’s Office:

“The subjects had snowmobiled numerous times in this area, including earlier this year,” the statement says, in part. “They were familiar with the area and the terrain.

“Search and Rescue crews from Beaver, Piute and Sevier counties were out late into the evening and are back on the mountain, continuing the search this morning. Over 50 officials from different agencies including UHP helicopter, Star9, Wasatch Back County Rescue and National Forest are in Beaver County assisting in the search as well.” 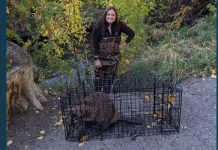