OGDEN, Utah, June 28, 2021 (Gephardt Daily) — Firefighters from multiple agencies are on the scene of a massive fire in Ogden which has burned homes and an apartment complex under construction on 28th Street between Grant Avenue and Washington Boulevard.

According to an 11:23 p.m. Monday tweet by the Ogden Fire Department, “Crews are aggressively mitigating an apartment complex under construction and several homes currently on fire.”

Posts on social media show frightened neighbors reacting to a towering wall of flames as droves of first responders surge into the area.

A number of nearby residences have been evacuated and others are on standby.

Witnesses told Gephardt Daily the fire started around sundown. According to unconfirmed reports, as many as seven residences have been involved in the fire.

The fire was the second within 24 hours in the area. Crews fought a fire Monday afternoon in an area southeast of the evening fire.

Gephardt Daily has crews on the scene and will update this breaking story as more information becomes available. 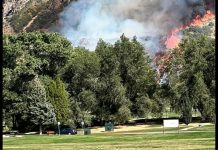 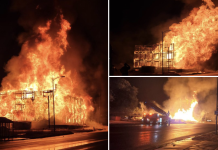