The men allegedly burglarized a vehicle on Tuesday, stealing a “high-end purse along with the victim’s credit cards,” said a Facebook post from Cottonwood Heights Police Department.

The suspects then allegedly used the cards fraudulently at a local Walmart.

“The BMW the suspects were driving is a 7 series third, maybe fourth generation, placing it in the late 90s to early 2000s,” the post said. “The license plates had Southtowne Mazda on them with a temp tag in the back.”

Anyone who has information about the incident or who recognizes the suspects is asked to contact CHPD Det. J. Griffith on 801-944-7013 or by email on jgriffith@ch.utah.gov. The reference number in this case is CH2020-11768. 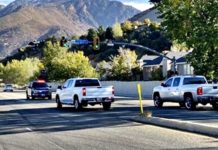 Woman in crosswalk killed by pickup truck in Cottonwood Heights 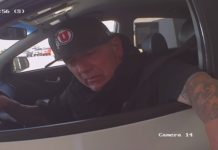