Home Local Utah News Kane County SAR, DPS helicopter rescue hiker from canyon
Facebook
Twitter
Pinterest
WhatsApp
KANE COUNTY, Utah, Sept. 19, 2021 (Gephardt Daily) —  Three members of the Kane County Sheriff’s Search and Rescue team were participating in a weekend of skills training when they were called to help a hiker who was stuck in a slot canyon.
The three technical ropes members were sent to the Sand Hollow Reservoir for the skills training, hosted by the Utah Sheriff’s Association, says a post on the Kane County Sheriff’s SAR Facebook page.
“This training coincided with the Ironman 70.3 World Championship held on Saturday,” the post says. “The skills training classes had just begun when a call came out requiring those same team members to respond to Spooky Gulch to assist a hiker that had gotten stuck in the narrow slot canyon.”
The Department of Public Safety helicopter flew the team to Spooky Gulch, “saving hours of response time,” the post says.
The team set up high angle ropes to be enable them to successfully rappel into the canyon and bring the hiker out.
“A vehicle carrying more team members and support equipment made it to the trail head just as the subject was rescued and flown to the parking lot by DPS,” the post says.
“KCSAR would like to thank the Utah Department of Public Safety and their helicopter crew for all of their assistance in this successfully completed rescue.” 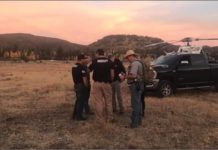 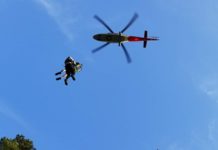 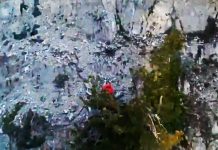