WEST JORDAN, Utah, Feb. 29, 2020 (Gephardt Daily) — A 38-year-old man was rushed to the hospital Saturday night after his motorcycle struck a car that police say turned in front of him on 7800 South.

Officer B. Bensendorfer, with the West Jordan Police Department, said the crash occurred at about 7:40 p.m., as the motorcyclist was eastbound on 7800 South.

A four-door passenger car turned in front of the bike at 2600 West, Bensendorfer said, and the bike T-boned the car.

The motorcyclist was transported to Intermountain Medical Center in critical condition.

The driver of the car remained on scene and is cooperating with the police.

The motorcyclist was not wearing a helmet, which contributed to the severity of his injuries.

“That’s why we always tell everyone to wear a helmet,” Bensendorfer told Gephardt Daily.

The Crash Analysis Reconstruction Team is at the scene as part of the ongoing investigation. 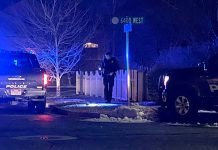