A probable cause statement from the 3rd District Court of Salt Lake County revealed the man who was shot by police, but survived, is Tyler Keaton Webster, 20. Webster was arrested Monday and is facing charges of:

According to the probable cause statement, Webster was shot after stealing a car from a man who was attempting to sell his vehicle on Facebook Marketplace last Wednesday.

“Webster organized a meeting place and time to conduct a visual inspection of the vehicle in question as well as engage in test drive of said vehicle,” the statement said. “The victim agreed to meet Webster and drove the vehicle down from Ogden. When the victim arrived, he met with Webster and another male.”

Webster asked to take the vehicle for a test drive, to which the victim agreed, but would not allow Webster and the other man to take his vehicle without the victim being present, the statement said.

The victim drove the vehicle during the initial test drive. Upon return, the victim and the third man were looking at the engine, with the hood up and vehicle running, when Webster got into the driver’s seat and drove off.

The victim immediately reported the vehicle theft to Salt Lake City PD. The third man stated he didn’t know Webster and left the area on foot, only to be located later by a passing police officer.

Other Stories of Interest:  Woman transported to hospital after house fire in Salt Lake City

“Webster took the vehicle, and after driving several blocks, stopped and put the hood down,” the statement said. “He then continued to flee the area and eventually traveled south on 1460 West.

“At about this same time, two officers with Salt Lake PD who were riding in the same vehicle, were traveling northbound on 1460 West from North Temple Street and found themselves head on with Webster.”

The officers activated their lights, presenting a visual command to stop and came nose to nose with the vehicle Webster was driving, the statement said. Webster attempted to flee from the officers by throwing the vehicle in reverse.

“Webster’s erratic driving placed one officer at risk of being crushed by a metal guard rail directly next to the vehicle,” the statement said. “Webster’s actions led to an officer involved critical incident, an OICI protocol was invoked.”

Sgt. Keith Horrocks, SLCPD, told reporters at the scene: “In approaching that vehicle and making contact with the driver, at least one round was fired by an officer,” Horrocks said. “Our officers rendered medical aid to the driver on scene until emergency medical services could get there. That driver was transported to a local area hospital with non life-threatening injuries.”

Webster underwent surgery and subsequently released to Adult Parole and Probation agents, who then transported the suspect to the Salt Lake County Jail. Investigators say Webster under was under supervision of AP&P at the time of attempted vehicle theft.

In keeping with OICI protocol, another agency — in this case the Unified Police Department — will be leading the investigation. 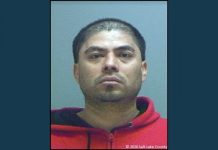 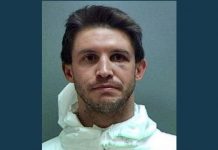