FAIRBANKS, Alaska, Nov. 11, 2021 (Gephardt Daily) — An Ogden doctor is facing charges after he allegedly faked hypothermia to try and get a helicopter to collect him while he climbed Denali mountain in Alaska, the Daily Mail is reporting.

According to a criminal complaint filed in Fairbanks, Alaska federal court, Dr. Jason Lance, who is listed on Ogden Clinic’s website as a radiologist, is facing the charges following a May 24 incident that occurred over 17,000 feet up Denali, formerly known as Mt. McKinley. The Alaskan peak is the United States’ tallest mountain, with its summit reaching 20,320 feet.

Lance, 47, is said to have tried to hail the chopper while descending from the mountain after giving up on his attempt to reach its peak, and complaining that he lacked the correct equipment to descend.

The doctor and a friend set out from Denali’s Camp 3, at 14,200 feet, to try and reach the mountain’s summit.

At around 17,200 feet, climbers begin to experience temperatures that dropped below -30 degrees Fahrenheit and winds over 70 mph.

The complaint states that Lance and his friend, identified in the complaint as AR, were between 18,600 and 19,200 feet when Lance “observed AR begin to exhibit symptoms of altitude sickness.”

Lance then left his friend behind with a second pair of climbers after realizing that his friend was too sick to continue, and took his friend’s Garmin satellite text-messaging device before continuing on by himself toward the summit.

The doctor eventually gave up on making it to the summit of the mountain, the complaint states.

He then rejoined the second team of climbers and his friend, who were nearing Denali Pass, at 18,200 feet.

The four climbers descended the mountain with Lance at the front, according to the complaint, with neither the doctor or his friend using safety ropes.

At around 6 p.m., the doctor’s friend fell from the top of Denali Pass, “tumbling approximately 1,000 feet down the Autobahn,” an icy slope connecting the pass to the high camp at 17,200 feet, the complaint says.

Other climbers at Camp 3 witnessed the accident and reported it to Denali park rangers.

An NPS high-altitude helicopter responded and airlifted Lance’s friend to a hospital in Anchorage in critical condition.

An hour later, once he had been evacuated, Lance used his friend’s satellite device to contact Garmin’s International Emergency Response Coordination Center, texting them “No injuries. stuck without equipment after climber fall. Request assisst (sic) for evac.”

After being told by park rangers that the helicopter “Cannot safely descend,” he wrote back saying: “Cant decend (sic) safely. Patients in shock. Early hypothermia… Cant you land east of pass?,” according to the complaint.

IERCC then responded with a message telling Lance, who was still with the other two climbers, to message Denali National Park rangers directly, and provided him with an email address.

Minutes later, Denali NPS messaged Lance to advise him, “If you have a rope available, you need to rope up and start descending. You may remove the fixed pickets and bring them with you to use further down if necessary.”

“Because medical shock is a serious and potentially fatal condition, Denali NPS launched a helicopter with rescue supplies to reach the climbers, but did not at that point inform Dr. Lance it had done so,” the filing continues. “Shortly after launch, the helicopter turned around because guides at 17,200 ft. camp reported that the three climbers were descending from Denali Pass under their own power.”

The three men made it safely to the bottom, and were intercepted shortly afterwards.

Lance is scheduled to appear before a judge for a detention hearing, via Zoom, on Nov. 29. 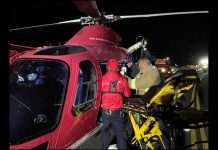 Update: Salem man, naked in river, ‘would not have survived’ without deputies’ efforts, UCSO says