WASHINGTON TERRACE, Utah, Jan. 16, 2021 (Gephardt Daily) — A man and woman in a Washington Terrace residence were struck by the same bullet Saturday when one or both of them were examining a gun they believed to be unloaded.

The incident was called in at about 12:32 p.m., Lt. Cortney Ryan, Weber County Sheriff’s Office, told Gephardt Daily. A deputy was nearby and responded within two minutes, he said.

A 47-year-old man and a 25-year-old woman were hit. The bullet when through the man’s leg, just below the knee, Ryan said. It then entered the woman’s thigh, striking and breaking her femur, and causing significant tissue damage. The bullet did not exit her leg.

“Deputies began immediate first aid on both patients,” Ryan said. “Both were taken to the hospital. The medical staff told deputies the tourniquets put on both patients assisted them, and prevented them from sustaining more serious injuries.”

Ryan said the man and woman were neighbors in the area of 4600 South and 500 West. They were in a residence, and other people who were present verified what had happened, he said.

Ryan said both victims “are expected to make a full recovery.” 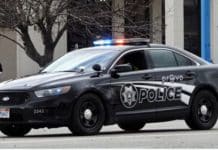