TOOELE, Utah, Jan. 12, 2022 (Gephardt Daily) — After further investigation and reviewing body-cam video, police say they have determined the sequence of shots fired early Wednesday morning, when a suspect was wounded by one of two Tooele officers who responded to a domestic violence call.

“There was some confusion as to the sequence of who shot first,” Tooele Police Lt. Jeremy Hansen told Gephardt Daily later Wednesday. “And that’s one thing we’ve learned today after watching the body cameras.

“The male points the firearm at our officers, and one officer fires two rounds. Then the suspect fires one round in the direction of the officers.”

Hansen did not disclose how many times the suspect was hit.

No officers were injured, and there were no injuries to anyone else at the house.

Officers were initially called to a residence in the area of 900 South and 600 West by a woman who said her husband was drunk, suicidal and armed, and had left the home.

Shortly afterward, the woman called to say her husband had returned home, and police were not needed, Hansen said in an interview with Gephardt Daily earlier Wednesday.

“One hour later, at 5 o’clock exactly, she calls back to dispatch and says that it is becoming physical with her husband, who is 49 years old. The dispatcher can hear the wife screaming for the husband to get off her,” Hansen said.

The officers arrived at the couple’s house and found the armed and intoxicated man in the garage.

Hansen said there was a confrontation, and one of the two officers fired twice. The suspect fired once. At the time, it was still unclear who had fired the first shot.

The man was hit in the upper torso, and was taken by ambulance to a helicopter pad, where he was transported to a Salt Lake City area hospital in critical but stable condition.

No update on his condition was available Wednesday evening.

The State Bureau of Investigation is among multiple agencies that responded to the scene to handle the officer-involved critical incident investigation. 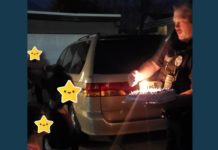 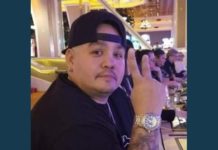 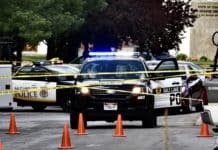