The accident occurred just before 1 p.m. when the driver of a Pontiac Grand Prix who was traveling west on SR-6 near Spring Glen, crossed the center lane into oncoming traffic and collided with a Gray 2009 Toyota Tacoma.
Other Stories of Interest:  Motorcyclist severely injured in Ogden Canyon crash involving 2 other vehicles
The female passenger of the Grand Prix, 38-year-old Carolyn J. O’Hearon, of Helper, and the female passenger of the Tacoma, Charlene L. Oviatt, 61, of Huntington, both suffered fatal injuries and died at the scene. The driver of the Tacoma, Jerry L. Oviatt, 62 from Huntington, suffered minor injuries and was transported by ambulance to Castleview Hospital.
1 of 4 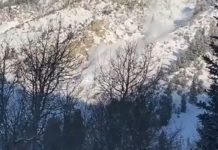