MURRAY, Utah, Dec. 18, 2021 (Gephardt Daily) — Utah Highway Patrol troopers were dispatched to the scene of a multi-vehicle accident on Interstate 15 northbound near 5300 South in Murray.

First responders were notified of the crash Saturday about 1:30 p.m.

Initial reports from the scene indicated four to five vehicles may have been involved in the incident, and at least one person may have been critically injured.

A UHP corporal authorized to talk about the incident confirmed two people had been transported to the Intermountain Medical Center in Murray, but could not speak to their conditions, or the number of vehicles involved.

Crash scene investigators have yet to determine the cause of crash.

“We’re still trying to figure out what the injuries are,” the UHP corporal said.

At about 3 p.m. two left northbound traffic lanes had been reopened. Alternate routes were still suggested. 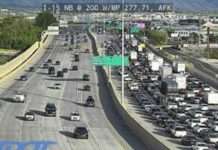