SALT LAKE CITY, Utah, Sept. 7, 2021 (Gephardt Daily) — An unruly airline passenger flying from Los Angeles to Salt Lake City Monday was cited for public intoxication after a series of inflight outbursts, three of which were captured on video.

In one of the recordings, taken by a fellow passenger, the suspect, identified by the Salt Lake City Police Department as Timothy Armstrong, 61, seems to be growling as he pulls menacingly at his face mask, clearly perturbed and seemingly mocking the crew.

In a second video he’s in the aisle shouting at a flight attendant, who orders him to “Sit down, now!” Making his way back to his seat Armstrong responds, “Gosh, really? Joe Biden!”

In a third clip, Armstrong is seated, yet making an obscene gesture to members of the in-cabin flight crew. “This is what you think about us,” Armstrong said, his middle finger extended. He then stands, saying “What, are you going to kick me off this flight? That’s what you think about us, bitches? You’re a f—ing bitch. God bless, America. I’m sorry folks, that’s what I think of America.”

Armstrong then averts his eyes as three police officers are seen approaching.

Dennis Busch, the man who recorded the videos, told Gephardt Daily most of the flight was uneventful until the last 30 minutes, and that he had not noticed Armstrong until the first outburst.

“He began by yelling at the Asian woman in front of me to sit down when she was standing to deal with a back issue,” Busch wrote on Facebook. “He proceeded to tell multiple flight attendants that she and her companion ‘didn’t belong here.’

“They had a commuting pilot sitting next to me and I switch seats with the couple. After asking him to calm down, the man went into a complete meltdown of racist, sexist and belligerent comments, culminating in his arrest at the gate. We were lucky to have such a well-trained crew who kept their cool throughout the flight!”

When we asked Busch how he remained so calm he said he only worried was when Armstrong stood in the aisle.

“The whole cabin, you could feel the nervousness each time he got out of his seat, but when he would sit back down, he was kind of just making noise, and muttering, and what not, when he was in his seat I didn’t feel very nervous,” Busch said.

“After he was harassing the Asian couple, who had to be moved, after that, after the flight attendants intervened, he directed all of his anger, mostly towards them, so that of course is anxiety inducing, but he wasn’t really harassing other passengers at that point. So, of course, it was horrible to watch him in the beginning, and I didn’t catch that on video, when he was harassing the passengers, but it was a very surreal thing.”

Busch said the incident was clearly upsetting for the couple that was harassed.

“We just watched this unfold but every time he stood up people just stiffened up because we just didn’t know what he was going to do,” Busch said.

He said he made the decision to take the video and share the post because he felt the flight team did such “an amazing job” in handling the passenger. “They kept us calm, in the cabin, they came through, even as the man was causing his commotion, and reassured us it was going to be fine and asked us not to engage with him. I just watched them handle it so well, plus it was a surreal experience.

“After the initial harassment was happening, and that was kind of difficult to process at first, and then we got settled back in and I just kind of realized, this is something that’s unfolding here, that’s why I captured the video. And when I sat down at baggage claim to look at the video, which I hadn’t done until I got of the plane, I just realized, it was a fascinating experience, so I thought, how could I not share it?”

Busch also added that if others find themselves in a similar situation and a passenger is being unruly, he would advise others to let flight attendants do their job.

“The most important thing that I witnessed today is that the flight crew is trained to deal with this, maybe not this specific situation, but let the professionals do their job, it’s not our fellow passengers’ job to police behavior or anything like that; it’s best to alert a flight crew member and let them deal with other passengers,” he said.

Airport Director of Communication and Marketing Nancy Volmer confirmed the incident and said Armstrong was cited for public intoxication. 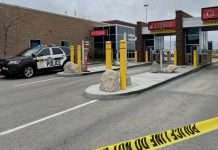