The fire first broke out Friday, June 26 at approximately 4 p.m. and was estimated at 450 acres.

“Unfortunately we have bad news on the Canal Fire in Millard County near Oak City. Because of strong winds the fire has escaped containment and is threatening structures.”

Residents of Fools Creek and Leamington were evacuated June 28; the evacuation notice has since been lifted.

An update on the Utah Fire Info website Monday said: “Firefighters continue to make progress toward full containment of the Canal Fire. Most crews have shifted from fighting fire to repairing the impacts of their suppression efforts; however there is still a small piece of uncontained line on the southern edge of the fire in the rugged terrain on the north side of Fool Creek Peak.

“Firefighters working on the southern edge of the fire will continue to build containment line today and extinguish hot spots to ensure the fire doesn’t reach Oak Creek Canyon. The fire is still about three miles north of the canyon. The canyon remains closed for the safety of firefighters and the public. In addition to their suppression efforts, crews in this area will also be involved in some repair work, including the installation of water bars along some containment lines to prevent future erosion.”

The post said starting Monday, the forecast calls for five consecutive days of Red Flag or near Red Flag conditions in the area. The firefighters assigned to the Canal Fire will remain in place through the end of the Red Flag period.

The fire was caused by lightning.

A tweet from Utah Fire Info Monday morning said 68 wildfire starts were reported to interagency dispatch centers over the July 4 weekend. Eighteen of them were fireworks-related. That brings Utah’s total wildifire starts this year to 644; 520 of them have been human-caused. 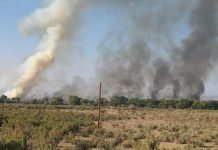