TAYLORSVILLE, Utah, Oct. 17, 2021, (Gephardt Daily) — Police in Taylorsville have released the name and photo of a suspect wanted in an early morning homicide.

Investigators say Manuel Omar Birciaga-Perea, 34, shot and killed his girlfriend early Sunday at a residence near 2300 W. 5200 South about 1:35 a.m., before fleeing, possibly to another state.

According to Taylorsville PD, officers were called to the scene of the reported shooting and “found an adult female with multiple gunshot wounds. The female was pronounced dead at the scene by the Unified Fire Department.”

Police say Birciaga-Perea should be considered armed and dangerous.

Anyone with information on his whereabouts is asked to call the Taylorsville Police Department at 801-840-4000. 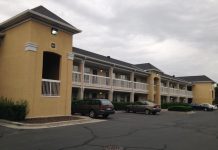 Trail of blood leads police to man shot in Taylorsville