WASHINGTON CITY, Utah, March 6, 2022 (Gephardt Daily) — Police say a wanted man who was stopped Thursday for speeding, was not only carrying drugs, but was also in possession of a homemade explosive device, according to Washington City Police.

Grady George Washington Gibson, 33, has been charged with:

A Washington City Police officer said he recognized Gibson as he sped by, and knew he was wanted on a no-bail warrant in connection with narcotics charges, the probable cause statement says.

“From previous knowledge, I also knew that Grady had drivers license that was not valid,” the statement says.

The officer said he activated his siren, and Gibson continued to drive before stopping at his residence.

Gibson was advised of the warrant in his name, and told officers he was a different Gibson, giving the name of a male family member, the statement says. He later revealed his actual identity.

Gibson was read his Miranda Rights and placed into a patrol car.

Drugs and paraphernalia were visible in the suspect’s car, which belonged to a relative of Gibson, police said. Among the drugs found were substances believed to be marijuana, heroin and methamphetamine.

“In the driver’s door, I located a large bullet casing,” the probable cause statement says. “The mentioned bullet casing was wrapped in duct tape and had a fuse coming out of the end of it. The top of the casing with the fuse was sealed off using some sort of silicone substance. Due to me suspecting that the item was a home made explosive device, a member of Washington County Bomb Squad was contacted and responded to the scene.

“The member of the bomb squad later confirmed with me that the mentioned item was indeed a home made explosive devise,” the statement says, adding, “Grady later denied knowing anything about the explosive device.”

Gibson was booked into the Washington County Purgatory Correctional Facility and ordered held without bail. 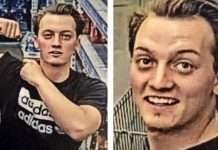 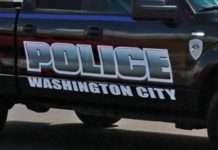 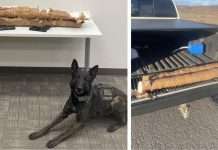 Driver arrested after ‘sandbags’ revealed to be 40 pounds of meth, police say