Later Friday night, they said that the break has been repaired and the road is open again.

Police tweeted that the water main break is at 370 South 500 West. They are asking everyone to avoid the area.

A subsequent tweet, at about 7:20 p.m., said the break is expected to take “many hours to repair.” 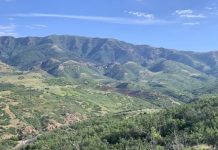