SOUTH JORDAN, Utah, Aug. 31, 2022 (Gephardt Daily) — A chase of a stolen truck involved multiple police agencies Tuesday night as the suspect ran a red light, zigged into oncoming traffic at one point, ran over tire spikes then caught on fire.

The truck believed stolen out of Millcreek was spotted around 10 p.m. by police on 700 East near 2700 South by a Unified Police Department officer, who followed without lights and siren, as UPD Lt. Paul Barker told Gephardt Daily.

The driver of the truck eventually realized he was being followed and sped off, Barker said, ran a stop sign and at one point briefly drove into oncoming traffic. The truck was pulling a trailer throughout the night’s adventure.

By the time the truck reached Redwood Road traffic spikes set for it disabled the pickup to the point it was driving on its rims. The truck then caught fire, reportedly in the area of 4750 W. Daybreak Parkway, likely from sparks from the rims, Barker said. “But I’m no fire investigator.”

Of more concern was the initial behavior of the truck driver and his passenger. “They’re not getting out of a truck that’s fully involved in fire,” Barker said.

The passenger finally got out and was immediately taken into custody. The driver then exited, and fled on foot, but a police dog gave chase and “took him into custody” about 100 yards away, Barker said. Both were cleared medically and treated for injuries, mainly smoke inhalation, before being booked into jail.

“And the good news is no citizens are hurt,” Barker said. “The only damage appears to be to the truck.”

Agencies joining the Unified Police Department in the roughly 45-minute duration of events included the Sandy, Draper, South Jordan and West Jordan police departments “and I’m probably missing a couple of others.”

He said the truck will be searched once it cools down from the fire. “Nobody wants to reach in there yet.” It was not immediately clear if the trailer was also stolen.

Chase Ends in South Jordan
1 of 5 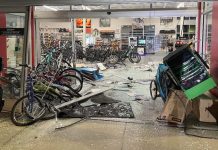