SUNSET, Utah, Jan. 11, 2021 (Gephardt Daily) — A driver escaped injury Tuesday afternoon when the front of her vehicle was hit by a northbound FrontRunner train in Sunset.

The woman was crossing the tracks when the lights began to flash and the guards came down. “She noticed the lights on and the arms coming down, so she tried to back up, but she didn’t back up far enough,” said Carl Arky, Utah Transit Authority spokesman.

“The front of her car was kind of sticking out, so the train caught that and took it off.”

No one on the FrontRunner was injured, Arky said. he said.

Union Pacific was also working in the area at time of the accident, according to Arky.

“They were activating lights and crossing gates and things like that. And I think that added to the confusion for the driver.”

An ambulance and fire truck responded to the scene, but the woman was not transported.

Damage to the train was likely minimal, Arky said. 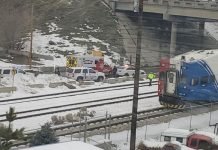