MORGAN COUNTY, Utah, April 8, 2019 (Gephardt Daily) — A woman was found dead in her truck after she crashed into the Weber River in Morgan County, officials said.

Utah Highway Patrol officials said employees with the Utah Department of Transportation discovered the crash in the river near Devil’s Slide on Monday morning.

Investigators believe the crash occurred overnight after the woman drove off Interstate 84, and that the truck was not visible from the road after it crashed, officials said.

It’s not clear at this early stage what caused the woman to crash.

Other Stories of Interest:  Passenger ejected after crash on icy I-80 in Salt Lake City

The identity of the deceased woman has not been released pending notification of her next of kin.

Devil’s Slide is a geological formation located near the border of Wyoming in northern Weber Canyon, near the community of Croydon in Morgan County. I-84 runs past Devil’s Slide, and the Weber River flows between the formation and the freeway. 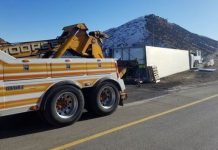 Semi rollover in Summit County causes I-80, I-84 delays 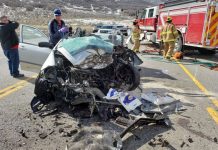