SAN DIEGO, March 26 (UPI) — A U.S. Navy officer was sentenced to 46 months in prison after being identified as the “golden asset” in a sex-for-secrets bribery scandal.

As deputy director of operations for the Seventh Fleet, Dusek was the highest-ranking official charged in a bribery scandal involving several members of the Navy.

“Captain Dusek’s betrayal is the most distressing because the Navy placed so much trust, power and authority in his hands,” U.S. Attorney Laura Duffy said. “This is a fitting sentence for a man who was so valuable that his conspirators labeled him their ‘Golden Asset.'”

“It’s truly unimaginable to this court that someone in your position with the United States Navy would sell out on the basis of what was provided to you,” Sammartino said.

Investigators said that Francis used Dusek’s influence to conduct a $34.8 million scheme, in which he falsified bills to overcharge Navy ships for their port visits.

Dusek became the first suspect in the bribery scandal to self-report his crime after Francis was arrested in 2013.

He expressed his regret as he spoke first at his sentencing hearing on Friday.

“I will never forgive myself for my dealings with Glenn Defense Marine,” Dusek said. “I recognize my rank is my biggest problem and also my biggest regret.” 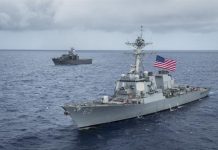