Nov. 18 (UPI) — A U.S. guided missile destroyer participating in a towing exercise in the Pacific Ocean sustained minor damage when a Japanese commercial tug boat lost propulsion and drifted into it Saturday, the Navy said.

The USS Benfold is part of the Seventh Fleet, which has had two fatal accidents in Asian waters this year when warships and commercial ships collided.

In a statement from the U.S. Seventh Fleet commander, the Benfold had scrapes on its side and no one was injured on either vessel in Sagami Wan.

Benfold remains at sea and the tug was being towed by another vessel to the port in Yokosuka.

The Navy said the Benfold is deployed to the U.S. Seventh Fleet “area of operations in support of security and stability in the Indo-Asia-Pacific.”

On June 17, the USS Fitzgerald collided with a Philippine cargo vessel off Japan, killing seven sailors. On Aug. 25, the USS John McCain collided with a Liberian container ship near Singapore, killing 10 sailors.

After an investigation, the Navy dismissed two officers “due to a loss of confidence in their ability to command.”

Previously, Japan-based surface warfare vessels were involved in collisions. In May, the Ticonderoga-class USS Lake Champlain was hit by a South Korean fishing boat. In January, the cruiser USS Antietam ran aground while weighing anchor off the coast of Japan, leading to major propulsion damage. 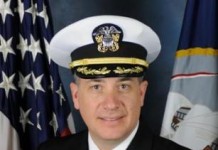